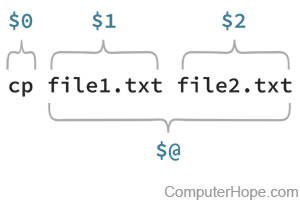 A typical example of a shell that uses positional parameters is bash. You can use bash on Linux, BSD, macOS X, and Windows 10.

Positional parameters are delimited by a space. The shell interprets the things after the spaces as individual parameters. If the parameter itself contains a space, enclose it in quotation marks, as in "three four," above.

While mycommand is running, bash provides it with the following shell variables:

The variable $0 is set to the first word of the command — the command name. This variable is useful because commands can be renamed, or executed using a symbolic link. Some programs behave differently depending on the command name used to run the program. $0 allows a program to see what command name launched it.

The variables $1, $2, and $3 contain the values of the first, second, and third parameters, respectively. If there was a fourth parameter, its value would be placed in the variable $4. Parameters greater than 9 can be accessed using curly braces around the number; for instance, ${10} would be the tenth parameter, and ${123} would be the 123rd.

The variable $# contains the number of positional parameters, excluding $0.

The variable [email protected] contains the value of all positional parameters, excluding $0.

The variable $* is the same as [email protected], except when it is double-quoted. When enclosed in double quotes, $* expands to $1c$2c$3c... where c is the first character of $IFS, bash's internal field separator variable. The IFS is used for word splitting, and its default value is "space, tab, or newline" — this is where bash sees the beginning and end of one word.

Here are examples of using positional parameters in bash.

Using the set built-in command, the value of [email protected] can be modified for the current shell. Everything after set -- is registered as a positional parameter.

Now we can iterate over these variables using for ... in:

In bash, [email protected] is the default list to iterate when you run for, so this command also works:

Iterating over "$*" (with double quotes) provides a concatenated string of positional parameters, joined with the first character of $IFS:

For more information, see the documentation of the bash command shell.