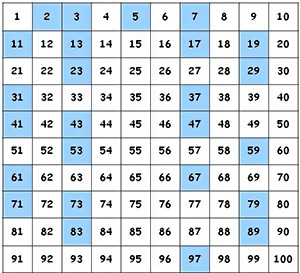 A prime number is a whole number that is only divisible by the number 1 and itself. For example, 2, 3, 5, 7, 11, 13, 17, 19, and 23 are all examples of prime numbers; dividing them by anything other than themselves, or the number one, results in a fraction. Prime numbers are often used in cryptography, and as a method for generating some kinds of random numbers.

For example, in RSA encryption, two large, arbitrary prime numbers are multiplied to generate a semiprime, from which a public encryption key is generated. For a recipient to decrypt the message without the private key, they would need to determine the two prime numbers used to create the semiprime. With large prime numbers, it is extremely complex and time intensive to determine those two numbers. Therefore, the private key is required to decrypt the message.

Those interested in prime numbers and want to help with discovering new prime numbers may want to consider the distributed computing program GIMPS (Great Internet Mersenne Prime Search). GIMPS volunteer Patrick Laroche from Ocala, Florida, helped discover the largest known prime number (as of 2019). The Mersenne prime, code-named M82589933, is equal to 282,589,933-1, or two multiplied by two 82,589,933 times, minus one. The 24,862,048-digit number was confirmed as prime by Ocala's computer on December 7, 2018.