PROM or programmable ROM (programmable read-only memory) is a computer memory chip that can be programmed once after it is created. Once the PROM is programmed, the information written is permanent and cannot be erased or deleted. PROM was first developed by Wen Tsing Chow in 1956. An example of a PROM is a computer BIOS in early computers. Today, PROM in computers has been replaced by EEPROM.

When the PROM is created, all bits read as "1." During the programming, any bit needing to be changed to a "0" is etched or burned into the chip using a gang programmer. Below is an example of a gang programmer from Advin that programs multiple ROM chips at one time. 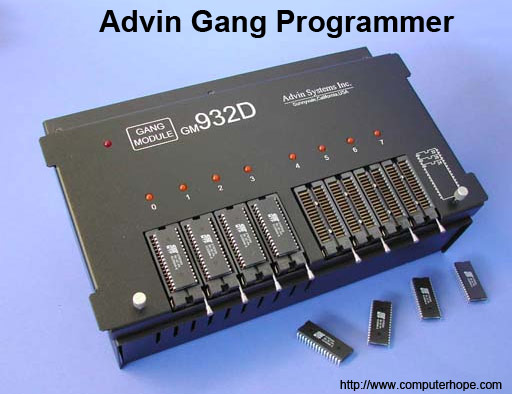 If a PROM is programmed with an error or needs updated, the chip is discarded and a new PROM is created, replacing the old chip. A variation of the PROM is an EPROM, which is a PROM that can be erased and reprogrammed without being replaced.