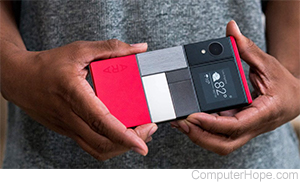 Initially developed in 2013, Project Ara was an experimental Android smartphone from Google based on Phonebloks, a modular phone concept designed by Dave Hakkens. The prototype phone was completely modular, meaning that individual components could be removed, replaced, and upgraded based on a user's needs. Modularization was done using small tiles that slid into the back of the phone, connecting with the central unit via pin connectors.

In 2016, Project Ara was canceled, and all development of the modular Android smartphone was stopped.