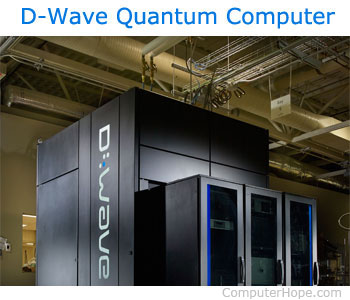 A quantum computer is a device that uses quantum mechanical phenomena such as superposition and entanglement to perform operations on data. A conventional digital computer uses electronic circuits on a plate of semiconducting material (e.g., silicon) to represent binary digits (bits), each in a state of either 1 or 0. In contrast, quantum computers use qubits that represent a "superposition" of both 1 and 0, simultaneously.

The field of quantum computing was first proposed in 1969, and formally introduced in 1980 by Yuri Manin and in 1982 by Richard Feynman. As of 2014, quantum computing is still in its infancy, with experiments yielding computations on a small number of qubits. On December 9, 2015, Google presented its findings that using D-Wave quantum computers it was able to solve some problems 100 million times faster than a conventional system.