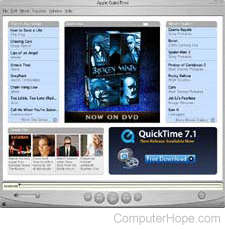 Apple confirmed in 2016 that it no longer intends to support or update QuickTime on PC (Windows) computers. Due to known security vulnerabilities, we highly recommend you make sure this program is uninstalled from your Windows computer.

For an example of an Apple QuickTime video, we've made the IBM Linux commercial .mov file available for download. This video plays in QuickTime, or another supported video player, such as VLC.