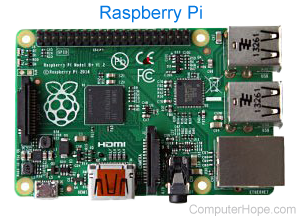 First released in 2012, the Raspberry Pi is a single-board computer created by the Raspberry Pi foundation in the United Kingdom. It was designed to be a small, cheap computer that could be used in schools to teach science to children. Since its introduction, almost four million Raspberry Pis were sold.

These machines use a 700 MHz ARM processor, and models can come equipped with either 256 MB or 512 MB of RAM. They can support up to five USB 2.0 ports. Raspberry Pis may utilize a MicroSD card or flash memory (up to 4 GB) for non-volatile storage, and uses HDMI for digital audio and video output. There is no onboard network interface, but they support Wi-Fi and Ethernet networking via USB.