Raster may refer to any of the following: 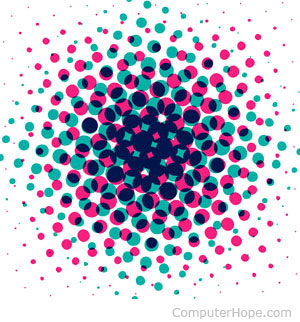 1. A raster image is an image file format that's defined by a pixel with one or more numbers associated with it. The number defines the location, size, or color of the pixels. Raster images are commonly .BMP, .GIF, .JPEG, .PNG, and .TIFF files. Today, almost all of the images you see on the Internet and images taken by a digital camera are raster images.

One of the biggest disadvantages of a raster image is the inability to resize the image without getting jaggies or other types of distortion. For example, increasing the size of a small raster image distorts the image because the image editor is resizing each pixel in the image.

Because of this disadvantage, many printing companies that print business cards, posters, or any other large printing require the image to be a vector image. Vector images are used for logos, graphics, and text because they can be resized in any direction without distortion.

What program can create a raster image?

Any program capable of opening one of the image formats mentioned above is capable of also creating a raster image. Most users use a paint program or image editor to create and edit raster images. One of the most popular programs is Adobe Photoshop.

2. Raster is lines on the inside of the screen traced by an electron beam to create an image called a horizontal scan line. These lines appear on a CRT monitor or a TV screen.