A relay may refer to any of the following: 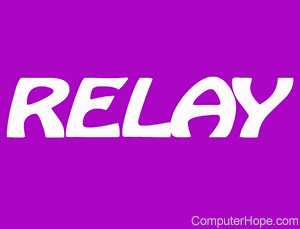 1. When relating to a computer or communications, the term relay commonly refers to the act of taking information and passing it to another location. This method of transferring data may be needed either to reach the final destination, or help prevent overloading of a single source. For example, when you make a phone call on your smartphone, it may have to be relayed through different cell towers, satellites, and central offices to reach its destination.

2. With electronics, a relay is a device with a low power source that powers an electromagnetic switch to control (turn on and off) a higher current. For example, a relay could be powered by a light sensor (lower power source) to turn on an electromagnetic switch to control the flow of electricity from a higher power source. With early computers (e.g., ENIAC and Z1) mechanical relays were used to help form logic circuits because they had separate control signals.