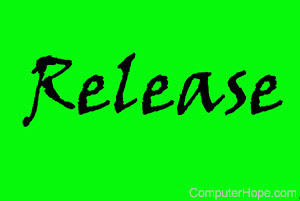 A release may refer to any of the following:

1. When referring to a software or hardware product, the term release, sometimes abbreviated in writing as rel, refers to a specific named or numbered version of published software. For example, the first published version of a product may be called the initial release. Future releases of related products may be called the second or third release or may have another release number.

2. When referring to a database or queue, the term release may describe when a task or other object is removed.

3. In a video game, release may refer to the action "release spirit." In the MMORPG World of Warcraft, the player must not release their spirit from their deceased body, or resurrection by another player is impossible. If the spirit is released, the player resurrects at a graveyard instead. See our rez definition for further information.