Resolution may refer to any of the following: 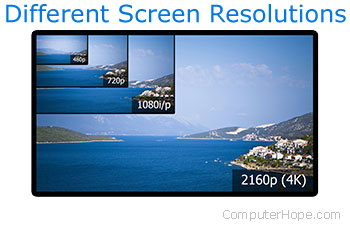 1. Resolution is the image quality produced by a printer or displayed on a monitor. With monitors, the resolution is measured by the number of pixels horizontal by pixels vertically. Printers also have a measure of resolution called DPI (dots per inch).

What happens with increased resolution?

When resolution increases, images become crisper due to a higher pixel density. In fact, text and images may also become smaller because more pixels per square inch are being displayed. For example, going from 800 x 600 to 1024 x 768 would increase the total number of pixels by 306,432. Those extra pixels are added to the screen with the same amount of text, thus making the text appear smaller.

As the resolution is increased, so are the performance requirements for your CPU and GPU. Computers with old hardware may not support high resolutions.

What happens when the resolution is decreased?

The opposite of what happens when you increase the resolution; text should appear bigger, images are not as crisp, and performance requirements go down.

What are the different resolutions for monitors?

All manufacturers today produce either widescreen or ultrawide monitors. Examples of their different resolutions are shown in the tables below.

3. A resolution is a term used to describe a set of steps or procedures that correct an issue with a product. For example, when encountering a problem with a computer, you may first troubleshoot the problem and find a fix on Computer Hope, following the steps is the resolution.