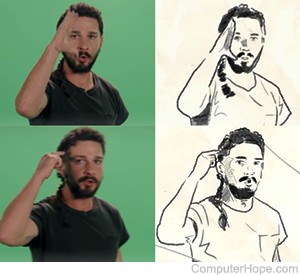 Rotoscoping is a technique used in animation, digital art, and video compositing. A live action subject is recorded on video and used as the basis for an animated character. Key frames from the video are traced by hand or computer to reproduce the natural motion of the subject.

The original rotoscope was a reverse-projection device invented in 1915 by Max Fleischer. It projected individual frames of film toward the rear of an easel. The artist would trace the image that was visible through translucent tracing paper. Famous examples of rotoscoped animation include the Disney films Snow White and Cinderella.

Today, almost all rotoscoping is created digitally using software, such as Adobe After Effects.