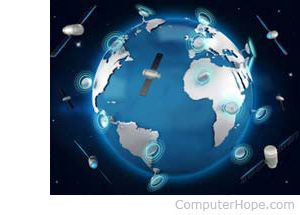 A human-made object that is placed into Earth's orbit. The first satellite, Sputnik 1, was launched by the Soviet Union in 1957. Today, there are hundreds of satellites in space that facilitate many services around the world, including GPS, global topography, and wireless communications. The illustration shows satellites around Earth and their receiving dishes on different continents.

Many of the map services available are capable of showing almost any spot in the World from space.