Microsoft utility purchased from Norton, which is now Symantec, and included with MS-DOS 6.2 and later, and all versions of Microsoft Windows except Windows NT. ScanDisk is a software utility capable of checking the hard drive or floppy diskette drive for any disk errors. When errors are encountered, ScanDisk will mark those sections of the disk to help prevent information from further issues.

Below is an example of Windows ScanDisk while it is running in Microsoft Windows. As shown in the image, ScanDisk lets you select what drive you want to check for errors. There is also a status bar to indicate its overall progress.

In this example, Windows XP is displaying a message that it'll begin scanning the computer if a key is not pressed within seven seconds. 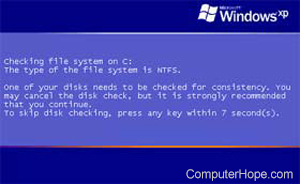 Microsoft Windows users can also run the chkdsk command from the command line or Recovery Console if they need to check their hard drive for errors.