Scroll may refer to any of the following:

1. Scrolling or scroll is the act of moving the visual portions of a window up, down, left, or right, to see additional information on the window. Scrolling can occur one line at a time or one page at a time, depending on your settings and how you're scrolling.

Below is an example of a Microsoft Windows window the user could scroll up and down using the vertical scroll bar, then left and right using the horizontal scroll bar. 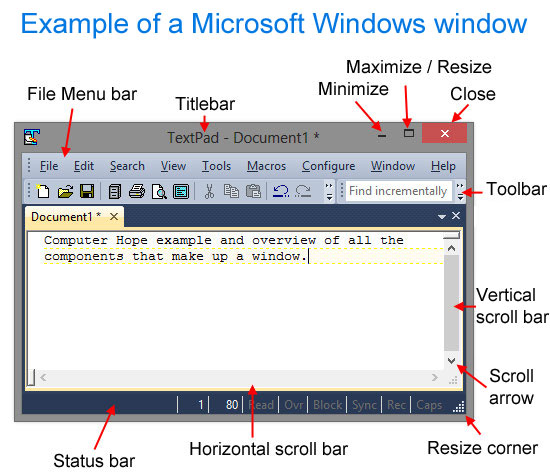 If you're using a mouse with a wheel, it can scroll up and down on a page. Some wheels may even have the capability to be pushed left or right to scroll horizontally.

How to scroll using a keyboard

Scrolling up and down depends on what you are viewing on the screen. Below is a list of the methods you can use scroll with a keyboard.

Page up and page down keys

Some people may also refer to the page up and page down keys as the scroll keys, not to be confused with the scroll lock key.

If you're editing a document or text field, the arrow keys move the text cursor in the direction of the arrow key pressed.

For example, you can press the spacebar now to scroll down one page and then press Shift and spacebar to scroll back up.

If your text cursor is in a text box or an editable portion of a web page or document, pressing the spacebar does not scroll. It creates a space.

How to scroll using a touchpad

Scrolling on a touchpad varies depending on the type of laptop you're using and its operating system. Below we've listed the most common methods of scrolling using a touchpad.

Today, most laptops and Chromebooks support the ability to use two fingers on the touchpad at the same time to scroll up and down. For example, dragging your index finger and middle finger down scrolls down on a page. Sliding up with two fingers scrolls up on a page.

The direction the page scrolls can also be adjusted through the touchpad settings.

How to scroll using a touch screen

On a touch screen device, swipe your finger up or down to scroll the screen up or down. Swiping up scrolls down and swiping down scrolls up. If the screen has a horizontal scrollbar, swiping left scrolls right, and swiping right scrolls left.

2. In computer gaming, a scroll describes a roll of paper with text containing information about the game or story. With some games, a scroll may give the character permanent or temporary abilities.