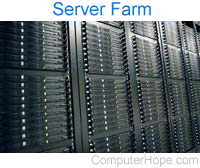 Sometimes called a farm, a server farm is a collection of computers that work in conjunction, or in parallel, with one another. Server farms are an implementation of distributed computing.

One of the largest, if not THE largest server farms, is maintained by the popular search engine Google. At last report, Google had over 10,000 computers in its server farm. The picture shows an example of a server farm with several hundred 1U rack mountable computers.