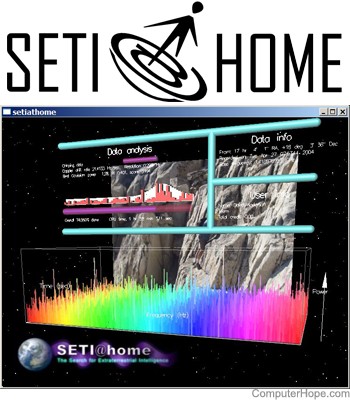 Short for the search for extraterrestrial intelligence, SETI is a nonprofit institute founded in 1984 that computes scientific data that might reveal intelligent, alien life in the universe. As an example, such data might include electromagnetic radiation received from outer space, which, when analyzed, may indicate an intelligent source.

On May 17, 1999, the [email protected] project was introduced to the public by the SSL (Space Sciences Laboratory) at the University of California, Berkeley, USA. The [email protected] middleware enables users all over the world to contribute unused CPU cycles on their computers or mobile devices, to help in the search for extraterrestrial intelligence.

The success of [email protected] led to an expansion of the system in 2002, applying the same grid computing approach to other scientific problems. By 2019, the system, called BOINC (Berkeley Open Infrastructure for Network Computing), was as powerful as the world's fastest supercomputers.

UC Berkeley announced that it would stop sending new work to [email protected] clients on March 31, 2020. Results from volunteers continue to be processed on the project's centralized computers.