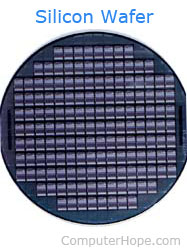 A silicon chip is an integrated circuit made primarily of silicon. Silicon is one of the most common substances used to develop computer chips. The picture shows an example of a silicon wafer with several individual silicon chips.

Steps on how Silicon is formed into chips