A simulation may refer to any of the following: 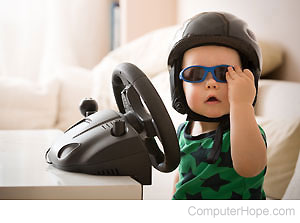 1. In general, sim or simulation refers to a computerized imitation of a real object or real action. For example, a computer scientist may use a supercomputer to simulate weather to help give weather forecasts.

Are we in a simulation?

Nick Bostrom has argued that our entire existence could be in a simulation. Simulation theory supporters see how much technology has advanced in the past 30 years and see how in another 30 years we could simulate the universe. Also, if we can develop such technology, it's not inconceivable someone else has created a similar technology and that we're now a part of that simulation.

Whether we're in a simulation or not is impossible for anyone to say with certainty.

3. A sim is a shortened version of a SIM card.

4. Sim is the prefix of several games developed by Maxis or EA. These games enable players to simulate another life or environment. Some examples are The Sims, Sim Ant, Sim Tower, and Sim Isle.