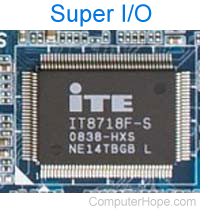 Short for super input/output, or super I/O, SIO is an integrated circuit on a computer motherboard that handles the slower and less prominent input/output devices shown below. When the super input/output was first introduced in the late 1980s, it was found on an expansion card. Later, this chip was embedded into the motherboard and communicated over the ISA bus. As ISA began to no longer be used with computers, SIO communicated over the PCI bus. Today, super I/O communicates through the Southbridge and is still used with computers to support older legacy devices.

How do I know what IC is the super I/O on my motherboard?

Identifying the super I/O on your motherboard is easy if you look for an integrated circuit that is labeled with a company's name that manufacturers super I/O chips. Some common super I/O manufacturers are Fintek, ITE, National Semiconductor, Nuvoton, SMSC, VIA, and Winbond.