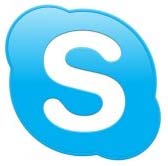 From some of the same developers that wrote KaZaA, Skype is a program for making VoIP calls to any phone, anywhere in the world. It's free for a Skype user to call another Skype user, regardless of where they are located.

A Skype name is a username, identifying a person's account. It is unique and may include letters, numbers, commas, periods, hyphens, and underscores. The Skype name is between 6 and 32 characters in length and created when first setting up an account.

After logging in to Skype, the Skype name appears in the upper-left corner of the application's window.