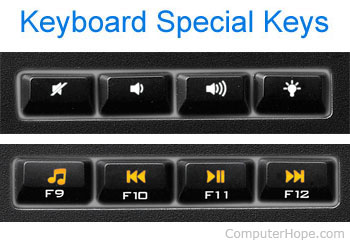 A special key or media key, or multimedia key is a keyboard key that performs a special function not included with the traditional 104-key keyboard. For example, the picture shows a Logitech keyboard. You can see that the first four buttons shown control the volume of the speakers and the computer's brightness. These four buttons, or keys, are considered special keys.

Special keys are found on keyboards often referred to as multimedia keyboards.

Some keyboards may also have special keys that perform more than one function with the use of an FN key. With the second four buttons shown in the picture above, you can see that they are the function keys F9 to F12. However, they also have orange icons that perform the special functions of controlling music. To use special keys with a dual purpose like these keys, press the Fn key and the special key at the same time. For example, if you wanted to press F12, you would press the F12 key. If you wanted to skip an audio track, you would press the Fn key and F12 key at the same time.

Toggle keys, like the Print Screen and Scroll Lock, are not special keys because they are on all keyboards.

Other examples of special keys

Below is a list of some of the special keys and the functions they are intended to perform. Some keyboards also allow you to program keys to perform other various actions.

How many special keys are on a keyboard?

There are no computer technology standards that dictate the number of special keys to be included on a keyboard. On average, most keyboards have between 12 and 20 special keys.