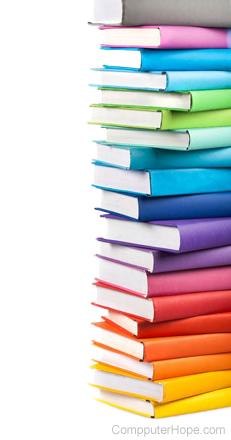 A stack may refer to any of the following:

1. A stack is a collection of software components designed (and often required) to operate together as a single unit. For example, the collection of libraries and protocols that enables TCP/IP networking is frequently called the "TCP/IP stack." Similarly, a developer who is proficient with all the components of web application development is called a full stack developer.

2. In computer programming, a stack is a data structure that only operates on the most recent item added, also known as LIFO (last-in, first-out). When a new item is added to the stack, it's called "pushing" that item onto the stack. When the most recent data item is retrieved and removed from the structure, it's called "popping" the item from the stack. These "push" and "pop" operations may apply to an array if the item added or removed is at the end of the array.

3. A stack may also refer to a collection of computers that are stacked upon each other or several caseless computer components a computer farm.

4. In some video games, multiple players join to defeat a creature, creating a party or raid. When fighting some creatures, it is necessary to stack together. When players stack, they are moving to a common spot, standing in a tight group to create a smaller target for the creature to hit or share incoming damage.

5. Stacks are a collection of folders found on the far right side of the Apple dock. The three default stacks are Applications, Documents, and Downloads.