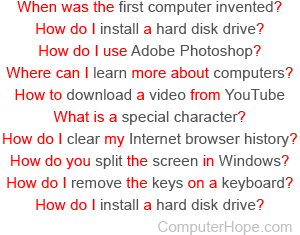 Stop words are commonly used words excluded from searches to help index and parse web pages faster. While most Internet search engines and NLP (natural language processing) utilize stop words, they do not prevent users from using them. Instead, the words are only ignored when the search results are displayed.

What words are not stop words?

Generally speaking, most stop words are function (filler) words, which are words with little or no meaning that help form a sentence. Content words like adjectives, nouns, and verbs are often not considered stop words. However, a programmer may choose to add common words. For example, Computer Hope may consider "computer" a stop word because it could describe any computer-related product (e.g., computer motherboard, computer video card, etc.).

Problems that may happen with stop words

Like most solutions, using stop words is not perfect and can introduce any of the following situations.