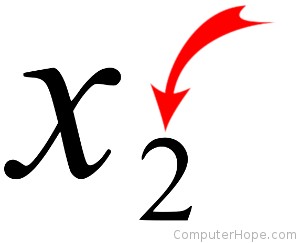 Subscript may refer to any of the following:

1. Abbreviated as sub, subscript refers to words or characters that are half the height of a standard character and printed lower than other text. Below is an example of subscript text, which shows "Subscript Text" halfway below the bottom line of the "Normal Text." 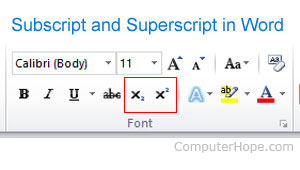 To create subscript in Microsoft Word, highlight the text you want to subscript and then click the subscript button, which is the X2 option in the Font section.

You can also highlight the text you want to subscript, press and hold down the Ctrl key, and press the = (equal sign.)

To create subscript in Microsoft Excel, follow these steps. 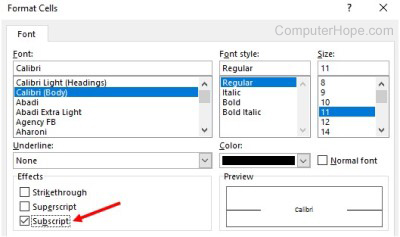 The subscript characters are displayed in the cell, but not in the formula bar.

To subscript text in HTML, use the <sub></sub> tags as shown in the example below.

Why would anyone need to use subscript?

Besides using subscript for its visual properties, there are other places that it can be used.

2. In computer programming, a subscript is a number representing an element in an array. For example, with example[3] or $example[3] the "[3]" is the subscript of the "example" array.