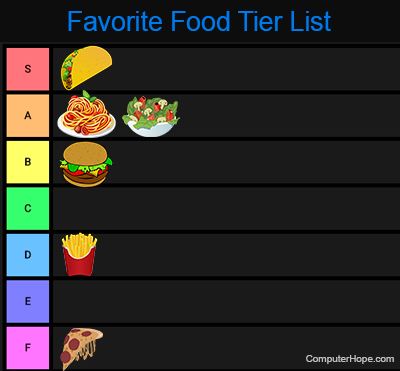 Tier lists became a popular trend among YouTubers and Twitch streamers, who ranked everything from movie characters to fast food restaurants. The striped template with colored boxes, as pictured on this page, were found across every corner of the Internet during the peak of tier list popularity. Today, tier lists are still commonly used to showcase opinions by ranking things.

The tiers used in a tier list are often predetermined and can vary depending on the template used. Most tier lists use an A through F scale similar to the American school grading system, while some choose to specify what each tier means with phrases like "Most powerful" or "Least favorite." One of the most common tier list templates is based on Japanese academic scores, and consists of the following tiers:

Many tier lists are created using photo editing software like Photoshop or GIMP. To set this up:

If you don't have photo editing software, websites like TierMaker provide customizable templates for creating your own tier lists or revisiting tier lists created by other users.