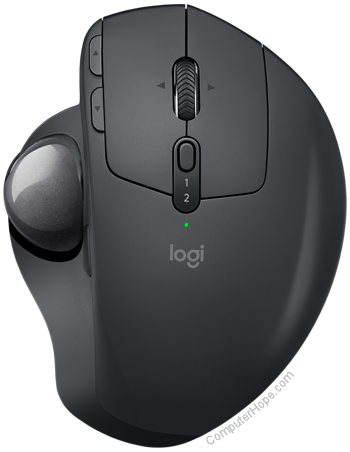 The trackball is an input device that may resemble an "upside-down" mouse or a mouse on its side.

Unlike a mechanical mouse ball that rolls along the desk surface, a trackball is on the top or side of the mouse. This positioning lets the user to rotate the ball in two dimensions with their fingers or thumb, controlling the on-screen pointer without physically moving the whole mouse.

A trackball requires less arm and wrist motion than a regular mouse and therefore is often less stressful for the user to operate, helping to prevent RSI. The picture shows the Logitech cordless trackball mouse.

The first trackball device was invented by Ralph Benjamin in 1946. Named the "roller ball," it was designed for use with a military radar plotting system. A prototype device was developed, and its use was a military secret, never released to the public.