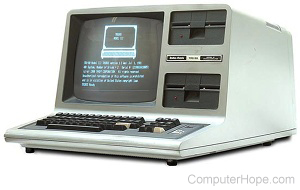 The TRS-80 was an early home computer developed by Tandy Radio Shack, first released in 1977. By 1979, the TRS-80 offered users the largest selection of software available for a consumer microcomputer system. Before it was discontinued in1981, over 100,000 of the computers were sold.

Along with the Apple II and Commodore PET, also released in 1977, the TRS-80 is part of the "trinity" of home computers that revolutionized the computer industry.

The standard hardware included in the TRS-80 included a Zilog Z80 microprocessor, 4 KB DRAM, and a monochrome 64-character width display.

The TRS-80 cost about $600, making it an affordable first computer for many households and schools. Because much of its software was provided as BASIC programs, users could view the source code and see how the programs worked. The design of the TRS-80 encouraged users to write their own computer programs.

Although the TRS-80 featured 4 KB of RAM at a time when most comparable computers only featured 1 KB, some users criticized the hardware of the computer. As a result, the TRS-80 was often referred to by the unflattering name "Trash-80." Despite this moniker, the TRS-80 was commercially successful and highly influential in the rapidly developing home computer industry.