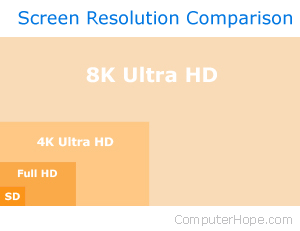 These two display resolutions are more detailed than Full High Definition (also known as 1080p) at four and eight times the pixel count respectively. While 4K televisions are currently mainstream, 8K is still a ways out due to lack of programming, bandwidth consumption, and huge file sizes for stored media. Essentially, there are 8K displays for sale, but they're expensive and the content available is likely half of their native resolution.