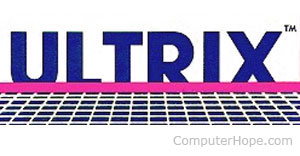 Ultrix is the name of Digital Equipment Corporation's native versions of the Unix operating system initially released in 1984 for VAX. The first version of Ultrix was named Ultrix-32, and was primarily based on BSD version 4.2, integrating some features of System V operating system. It was released in binary format only and the source code was not provided in the software distribution.

Ultrix was later released for three DEC platforms: VAX, the PDP-11, and their DECstation line of workstations and servers. The original desktop environment for Ultrix was called UW (Ultrix Workstation) Software and was based on the X Window System. Later, when use of version 11 of X Windows (X11) became widespread, X11 was adopted as the Ultrix desktop environment. X11 was given a UWS look, feel, and functionality, and called DECwindows.

Development of Ultrix eventually fell behind other competing Unix systems, failing to support newer features, such as bind, shared libraries, and dynamically linked executables. It suffered from file system integrity issues not found in other modern Unix operating systems, and by the early 1990s, DEC shifted its development focus from Ultrix to OSF/1.