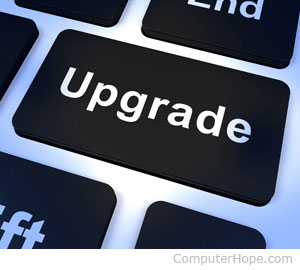 With computer hardware, an upgrade is a term that describes adding new hardware in a computer that improves its performance. For example, with a hardware upgrade, you could replace your hard drive with an SSD or upgrade the RAM, providing a boost in performance and efficiency.

Advantages of a hardware upgrade

Disadvantages of a hardware upgrade

What is a software upgrade?

When referring to software, a software upgrade refers to any major upgrade to the software that adds significant or completely new changes to the program. An example of a software upgrade is upgrading your version of Windows. For example, if you had Microsoft Windows XP and upgraded to Windows 7, it would be considered a software upgrade.

Differences between software upgrades and updates

An update and upgrade are two different things. Updates are usually free and often very small. An upgrade is usually not free and much larger. For example, if you have Windows XP and want Windows 7 you would "upgrade" to Windows 7. However, if you had Windows 7 and needed to install fixes for security vulnerabilities or other problems you would "update" Windows. See the update definition for information on this term.

Benefits of a software upgrade

Some software upgrades are not free. However, most software updates are small and often free because they fix bugs with a program.

Risks of not doing a software upgrade

Almost all software developers release small software updates to help keep a program secure and stable. If the program is successful the company may release a software upgrade, which is a new version of the program. After releasing a new upgrade, the previous versions eventually reaches EOL (end of life) and stops being supported. For most software programs, this is not a problem as long as you no longer need support from the developer. However, for operating systems and software programs that could have potential security vulnerabilities, not upgrading may leave your computer vulnerable to attacks.

How can I upgrade my computer system?