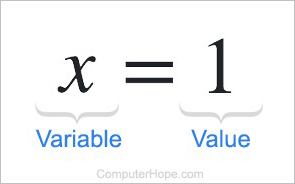 A variable is a named unit of data that is assigned a value. If the value is modified, the name does not change. Variables are used with most programming languages and come in many forms, defined by the script or software programmer.

If a variable's value must conform to a specific data type, it is called a typed variable.

Example of a variable

Below is an example of a variable in the Perl programming language.

In the first line of the program, the variable is assigned a value using the assignment operator, =.

The value of fullname is the string Computer Hope, which is enclosed in double quotes. The double quotes indicate that the text inside is a string, but are not part of the string data.

When you run the program, the print statement replaces the variable name, $name, with its string value. Then, it displays the result:

What is a global variable?

A global variable is often declared at or near the beginning of the script or program code.

What is a private variable?

In object oriented programming, a private variable is declared in an object class. Its value cannot be accessed or modified by code outside the lexical scope of that class.

There are many different ways a variable can be deleted, changed, exchanged, or set as a different value. Below are examples of how a variable could be changed, with comments explaining what's being done.