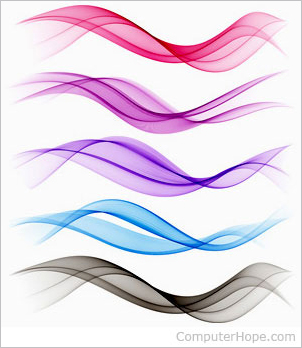 In computer graphics, a vector graphic or vector image is an image made up paths (lines with a starting and ending points). These paths, all based on mathematical expressions, consist of basic geometric shapes, such as lines, polygons, and curves. The key advantage of using vector graphics instead of raster images is their ability to scale without compromising image quality. For example, you could use a vector graphic to help make a banner or sign. The image can be small on your computer but scaled to the size required without any jaggies or other image distortions.

What file formats are vector graphics?

There are many different file formats (file extensions) used to create a vector graphic. The most common vector file types include .ai, .eps, .pdf, and .svg. One of the most popular programs used to view and create vector images is Adobe Illustrator.

There are many reasons why most printing companies need a vector image. The ability to resize the image to any size without loss of quality or distortion is one of the biggest reasons most companies require a vector image. Another reason is the ability to outline all elements of the image. Doing so allows the printer to give the appearance of any font, even if a font is not available for the printer.