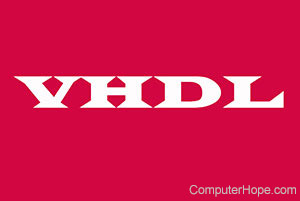 Short for VHSIC Hardware Description Language, VHDL was first proposed in 1981 and developed throughout the 1980s by IBM, Texas Instruments and Intermetrics. VHDL is used for the development and verification of hardware designs and was adopted as IEEE 1076 standard in 1987.