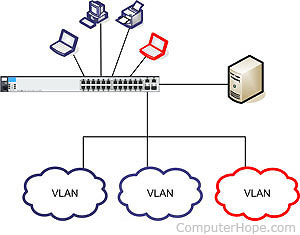 VLANs are also critical because they improve overall network efficiency by grouping devices that most frequently communicate. VLANs offer protection in bigger networks by enabling a greater degree of control over the equipment. VLANs for enhanced traffic control are mostly set up by bigger organizations for repartition devices.

VLANs were explained for the first time in 2003 in IEEE 802.1Q's first edition as Ethernet VLANs.

Working with a VLAN

VLANs can be allocated using single or multiple ports (interfaces) and are grouped into logical classes depending on the connection or control type and their interaction with themselves. The same VLAN ID is used to manage ports connected to switches for all hosts using the data link provided by VLAN. In the Ethernet header, the VLAN tags are a 12-bit field. IEEE standardizes VLAN as 802.1Q. It is also referred to as Dot1Q.

When a connect host obtains an unsecured frame utilizing the 802.1Q format attached to the data link frame header, the VLAN ID tag is installed on an interfacing port. The frame 802.1Q is then sent to the destination. A VLAN is configured such that it has to hold traffic separate from other VLANs; each switch uses the name and only transmits this. Trunk connections among switches operate numerous VLANs, which are divided utilizing the tag or name. When the frame hits the target switch, the VLAN tag is stripped off before the frame is sent to the target computer.

The trunk configuration of each VLAN frame sent via the port (mentioned above) can configure multiples VLANs on a single port. To send and accept tagged frames, you need a neighboring system interface on another host, system, or switch that accepts 802.1Q tagging. Any unscheduled Ethernet frame is allocated to a default VLAN in the setup of the switch.

When an untagged Ethernet frame from a connection host arrives at the VLAN switch, the VLAN tag allocated to the input interface is applied. The frame is attached to the MAC address and sent to the host port. Broadcast unknown unicast and multicast is sent to all VLAN ports. If an unknown host addresses an anonymous unicast system, the switches learn the host location. Then, they do not send frames to that host.

It is used to establish loop-free topology in each domain of layer 2 among the switches. Per-VLAN STP may be utilized to minimize the total STP if the topology is similar between various layer 2 topologies or MISTP (multi-instance STP). STP blocks connections that could trigger propagation loops and create a spanning tree from the selected switch to root. This block does not allow STP to be part of an active forwarding route until a breakdown in another part of the network occurs.

There are three basic types of VLAN:

A static VLAN is a collection of ports defined as part of the same broadcast domain by a switch. In other words, all ports with traffic for a given subnet address belong to the same VLAN. With a VLAN it's possible to group users by a logical method rather than by location, which helps handle bandwidth consumption and arranging users on their needs.

A switch assigns a VLAN to a port using data from a user system or devices such as IP address and MAC address automatically in a dynamic VLAN. When a computer is connected to a switch socket, the switch requests for establishing VLAN membership to the database. Dynamic VLANs provide immediate activation of the end devices. The dynamic VLANs can configure VLAN membership dynamically if the system is transferred from one port to another port on another switch.

The following list is some of the advantages of a VLAN.