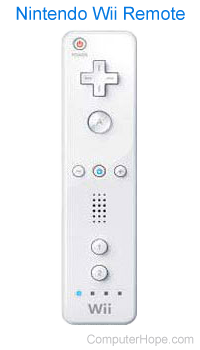 Code-named Revolution, Wii is the product name of a Nintendo gaming console that was first released on November 19, 2006. What makes the Nintendo Wii stand out amongst competitors is its motion sensing control pad (shown right). This special remote allows the player to simulate swinging a bat to hit a baseball or a fist to punch with in a boxing game.