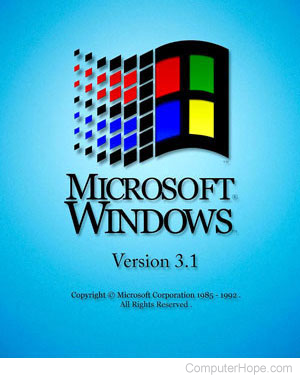 Released on May 22, 1990, Windows 3.0 was the first version of this generation of Windows, with 3.11 as the version most people used with early IBM compatible computers and remember.

After the release of Windows 3.0, Windows 3.1 was released on April 6, 1992 (code-named Sparta). It was one of the first PC GUI (graphical user interface) operating systems widely used.

Windows 3.1 allowed users to utilize several features previously not available in MS-DOS. One of these new features was the use of a mouse, which allowed users to navigate and manipulate data on the computer without using MS-DOS commands.

Windows also helped introduce multitasking to the masses, which means you can run multiple applications at once without having to close out of each program before running another. Windows with other GUI operating systems are one of the many reasons computers have become easier and more widely used.

In the picture below, is an example of Microsoft Windows 3.1 Program Manager and is what you would see when Windows started. From the Program Manager, you could access programs and settings that allowed you to control Windows. 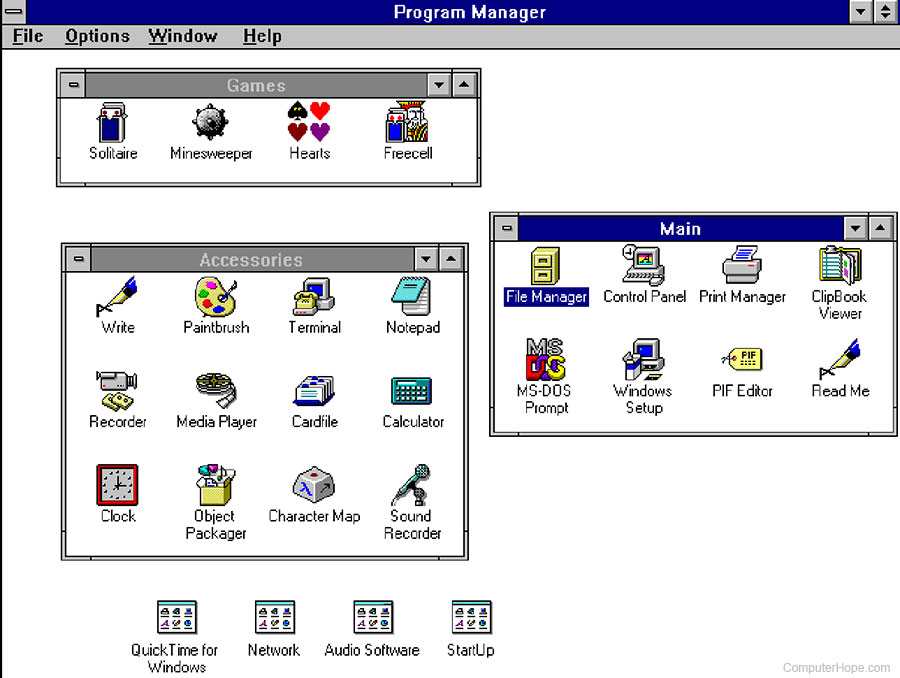 What version of Windows came before Windows 3.11?

For the end user, Microsoft Windows 3.1. Even earlier versions of Windows is on our Windows history page.

What version of Windows came after Windows 3.11?

For the end user, Microsoft Windows 95 came after Windows 3.11.

All the following commands need to run from C:\Windows> and when run need to have the win statement added to statement. For example, on the below first switch you would type "win winsetup /a" (without the quotes).

winsetup /a - Install a group license version of Windows to a network server. The Administration option requires 29 MB hard disk space on the server for Windows for Workgroups allowing users to run Windows over the network.

winsetup /n - Set up Windows from a workstation connected to the server's shared directory where the Windows files are stored.

winsetup /b - Set up Windows with monochrome display attributes.

winsetup /t - Searches the drive for incompatible software that should not run at the same time as setup or Windows 3.1 (maintenance mode only). It does not set up Windows but does the TSR checking.

winsetup /h:fn - Run an automated batch mode setup. The command is setup /h:<file name>, where <file name> is the name of the system setting file containing the information about the user's configuration.

WIN /S - Starts Windows in standard mode (also WIN/2 will work). Standard mode is faster than 386 Enhanced mode. You might want to use this option if you only run Windows programs or are experiencing hardware compatibility problems when running in 386 enhanced mode. Note: Not available in Windows for Workgroups3.11.

WIN: - Runs Windows without displaying the logo screen, (if you have a program like shareware WINGIF, you can compress any bitmap into RLE (run length encoded) format and create a logo screen. RLE format files still work as wallpaper in their compress form. The compressed file in this procedure cannot exceed 55 k in size.

WIN /R - Windows 3.0 uses this switch to force running in real mode. Other versions of Windows higher than 3.0 do not support real mode. Note this causes the computer to run slower.

WIN /B - Creates a text file called BOOTLOG.TXT detailing every step of the load process.

How to determine the version of Windows 3.x

From Program Manager click Help and then click About. In the About screen, the version of Windows you're running is shown. For example, you may see Windows for Workgroups 3.11.