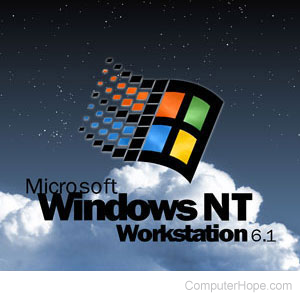 Microsoft Windows NT is an operating system. The first published version was Windows NT 3.1 in 1993. It had a similar interface to Windows 3.1, with advanced networking capabilities and hardware support. In August 1996, Microsoft released Windows NT 4.0 with an interface similar to Windows 95. Windows NT was later replaced by Windows 2000; however, it still had the Windows NT kernel.

David Cutler is considered the father of Windows NT.

What is the "NT" short for in Windows NT?

The "NT" in Windows NT was originally officially short for "new technology." However, today "NT" is no longer considered an acronym.

Some believe that after David Cutler was brought over from DEC (Digital Equipment Corporation) to help develop Windows NT that he used "WNT" because it is each letter after "VMS." VMS is an operating system he helped create at DEC. "WNT" may have been a way to pay homage to VMS, or maybe he was inspired by the story behind HAL 9000 in 2001: A Space Odyssey.

Backronyms sometimes used for "NT" include "network technology," "non-trivial," and "not tested."

Windows NT in the user agent