A worm may refer to any of the following: 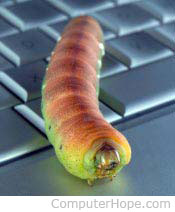 1. First developed by John Shoch and Jon Hupp at Xerox PARC in 1978, a worm is a destructive self replicating program containing code capable of gaining access to computers or networks. Once in the computer or network, the worm causes harm by deleting, modifying, distributing, or otherwise manipulating data.

2. Short for Write Once Read Many, WORM is a CD technology introduced by Philips and Sony in 1988. Using this technology, a CD is written to once, but then may be read until it wears out. See CD-R for additional information.

3. Worms is also several games developed by the Team 17 company.