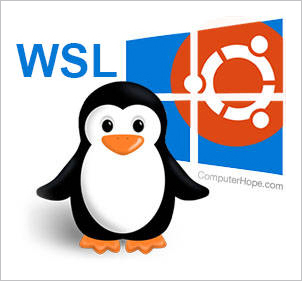 The Windows Subsystem for Linux, or WSL, is an optional feature of Windows 10 that allows Linux programs to run natively on Windows. WSL was designed by Microsoft in partnership with Canonical, the creators of Ubuntu. Together, they created a kernel compatibility layer based on Ubuntu. This compatibility layer allows Linux programs to run in a Windows 10 version of the Bash shell.

What can WSL be used for?

WSL gives Windows users access to powerful core programs available in Linux including GNU tools such as find, awk, sed, and grep, which can locate, search, and modify the contents of files.

Not all Linux programs can be used in WSL. Some low-level system tools, for example, require an actual Linux kernel to run correctly. Also, WSL is not intended to run GUI applications. Although it's possible to install the X11 window system under WSL, graphical programs are not guaranteed to work correctly, if at all.

However, WSL comes with the software package tools apt and dpkg, which provides access to a thousands of command-line Linux applications. They can operate side-by-side with traditional Windows applications, with native access to the Windows filesystem. In essence, WSL makes Linux tools a part of Windows.

WSL requires a 64-bit version of Windows 10, with the Anniversary Update (released on August 2, 2016) or later installed.

How to install WSL

To install the Windows Subsystem for Linux follow the steps below.

You are prompted to reboot the computer. Type Y and press Enter.

After the computer reboots, open a new command prompt window.

At the command prompt, run bash to complete the installation.

For detailed installation instructions and a guide to using WSL for the first time, see: How to install WSL on Windows 10.