X may refer to any of the following: 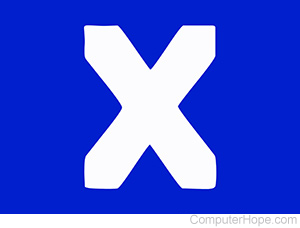 1. An x is generally used to represent a generic variable. For example, you may see Computer Hope and other companies write Microsoft Windows 3.x. In this case, the "x" can be replaced with any valid digit. For instance, it may represent the "1" in Windows 3.1 or the "11" in Windows 3.11.

3. Formerly Google X, X is a subsidiary of the Alphabet conglomerate. See the X company page for further information.

4. In mathematics, an x may represent a times sign. For example, 4 x 4 = 16. The times sign may also be an interpunct (·) or an asterisk (*). See our multiply page for further information.

5. When shown in the top-right corner of a window, the X is a button used to close a window.

6. X is a service found on some IRC networks that allow users to manage the chat rooms, called channels, that they can view.

7. Abbreviation for X Window System. See the x command page for further information about this command.

8. X is a keyboard key used with the keyboard shortcuts Alt+X, Command+X, and Ctrl+X.

11. With Microsoft Excel and other spreadsheet programs, "X" is the twenty-fourth column of a spreadsheet. To reference the first cell in the column, you'd use "X1."

13. X is the twenty-fourth letter of the English alphabet. The letter "X" comes after "W" and is followed by the letter "Y." To create a capitalized "X," press Shift and X at the same time.

On a U.S. QWERTY keyboard, the "X" key is on the bottom row, to the right of "Z" and left of the "C" key. See our keyboard page for a visual example of all keyboard keys.

If the "X" key is not working on the keyboard, see: Some keys on my computer keyboard aren't working.

The number 9 on a phone keypad is used to create an "X" on a US phone.