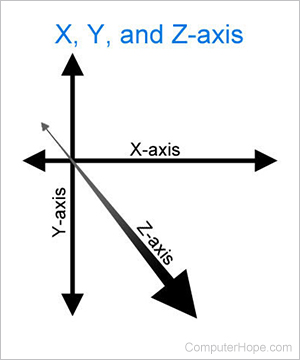 When referring to a two and three-dimensional plane, a y-axis or vertical axis refers to the vertical height of a two or three-dimensional object. In the illustration, the y-axis plane moves up and down and intersects with the x-axis and z-axis.

An example of what uses the y-axis is a computer mouse. Moving the mouse up or down increases and decreases the y-axis value, allowing the computer to know where the mouse cursor is on the screen.

Below is a JavaScript that shows you the mouse's x-axis and y-axis position as you move your mouse pointer in the screen area.

If you're on a smartphone or tablet, tap your finger to get position of the tap.

Other examples of a y-axis

Below are a few other examples of how the y-axis is used on a computer.