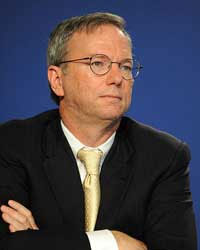 "The Internet is the first thing that humanity has built that humanity doesn't understand, the largest experiment in anarchy that we have ever had."