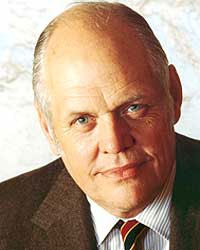 "Software comes from heaven when you have good hardware."

"There is no reason anyone would want a computer in their home."