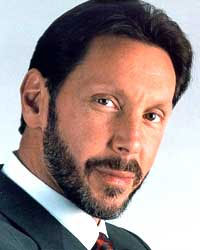 "If the Internet turns out not to be the future of computing, we're toast. But if it is, we're golden."

"If an open source product gets good enough, we'll simply take it. So the great thing about open source is nobody owns it - a company like Oracle is free to take it for nothing, include it in our products and charge for support, and that's what we'll do. So it is not disruptive at all - you have to find places to add value. Once open source gets good enough, competing with it would be insane. We don't have to fight open source, we have to exploit open source."