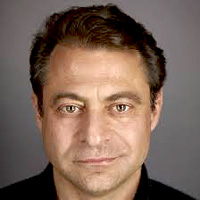 "Every generation feels it has the problems that will destroy it. That's because we can perceive them a long time before we have the ability to fix them."