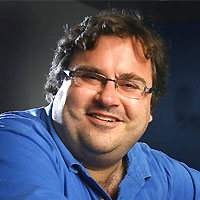 "One thing I learned in '97, when I thought the right time to found a company was during a swing-up, is that it's much better to start during an economic downturn. Partnerships are easier; hiring is easier; and the competition starts later."

"People will be discovering that the Internet helps their career. One of my theses is that every individual is now a small business; how you manage your own personal career is the exact way you manage a small business. Your brand matters. That is how LinkedIn operates."