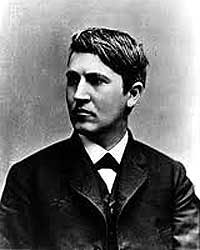 "Our greatest weakness lies in giving up. The most certain way to succeed is always to try just one more time."

"Anything that won't sell, I don't want to invent. Its sale is proof of utility, and utility is success."

"I am proud of the fact that I never invented weapons to kill."