Automate your work with AutoHotkey

AutoHotkey is a free and powerful tool that lets you automate almost anything on your Windows computer in any program. Computer Hope uses this tool daily to help answer common questions asked in e-mail quickly and perform other common repetitive tasks. If you do anything daily that requires you to repeat the same actions, we highly recommend using this tool. This page demonstrates some of this program's capabilities.

This tool can automate tasks in gaming, some online games may consider this cheating and if caught it may result in a ban.

If you want to follow with this page's examples, please download and install AutoHotkey before following any of these steps. Otherwise, skim this page for a better understanding of the program before downloading and installing it on your computer. 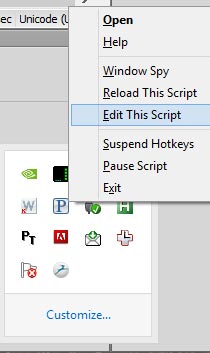 After AutoHotkey is installed to create and edit a script right-click anywhere on the desktop or in a folder, click New, and choose AutoHotkey script. Name the script whatever you want, then right-click the script file and select Edit the script.

If you plan on always using the same scripts you can also load AutoHotkey at startup, right-click the AutoHotkey icon (

) in the Windows notification area, and click Edit this script. The default script (AutoHotkey.ahk) opens in your default text editor and allow you to add or change your script. Each time AutoHotkey loads when your computer starts this default script loads this script.

Each script in AutoHotkey can also be assigned a keyword (hotstring) or a personalized keyboard shortcut key. When using a keyboard shortcut any shortcut can be used as long as Windows has not already assigned those keys to another task. Each shortcut key can be comprised of any of the following modifier keys and any other letters, numbers, or other keys on the keyboard followed by two colons (::).

AutoHotkey includes two example scripts, the first one (as shown in the picture) opens the AutoHotkey web page when you press the Windows key and Z at the same time. Which can be done now if you have AutoHotkey installed and the default autohotkey.ahk loaded. Otherwise, this line can be added to a new script, saved, and ran to allow this shortcut to work.

Most scripts are more than one line. However, in the above example, it's only one line and needs no additional commands. In the following script example, the script has multiple lines, and as shown, must be finalized with the "return" command to prevent anything following this script from being executed.

The script above starts with the shortcut key Ctrl+Alt+N, the next four lines are an if else command, which in English translate to "if an untitled Notepad window exists then make that window active, else run a new Notepad."

With your basic understanding of how this program works, lets create your first script to print "Hello World!" anywhere you want. Move the cursor to the end of your new script file or the default Autohotkey.ahk script file and add the following line.

In this first example, we are not using a shortcut, only the keyword "hello" to execute the script. Also, because "!" is a modifier key command for the Alt key its been surrounded by curly brackets, which indicates the key, not a command. Finally, this script also contains a comment at the end, which is everything from the semicolon to the end of the line. In AutoHotkey scripts, all text between a semicolon and the end of the line is considered to be a comment. You can use comments to help explain the code in the script.

Any time you make any changes to a script it must be reloaded or run for those changes to work.

) in the Windows notification area and choose the Reload This Script.

Once the script is loaded, you should be able to type "hello" in the following text box and after pressing space or any punctuation the script type out "Hello World! My first script."

If you don't want to have to press the space or punctuation, you can add an asterisk between the two first colons.

Next, in the next example, we are creating a script that is executed with a shortcut key. Edit the script and add the following three lines to your script.

After these three lines are added, save the file as the same file name and then reload the script. If done successfully, clicking in the text box below and pressing the Windows key+F2 would print "Hello World!" to the screen.

Any shortcut keys can also be added, data can be copied to and from the clipboard, and the script can sleep for any amount of time. Edit the script again and make the following changes to the script created earlier.

In the example above, lines three and four have introduced how keys can be pressed in the script to perform other keyboard shortcuts. The third line is pressing Ctrl+Shift+Home to highlight all text before the cursor, and the next line is pressing Ctrl+C to copy the highlighted text. Anytime a key is pressed down (e.g., {CTRLDOWN}), make sure it is let go with up (e.g., {CTRLUP}), otherwise it remains down and cause problems.

The fifth line introduces a variable and the %clipboard% command which contains anything in your clipboard. With this line, all contents in the clipboard are assigned to the "example" variable.

Next, the sleep command is a great command for making the script sleep for any length of time. 1000 is equal to 1 second. This command is useful and often necessary if the script has to wait for the computer to open a program or window.

Finally, the last send command adds " - new hello =" with the hello world now all in uppercase. This revised version of the script can be tested again in the text box. 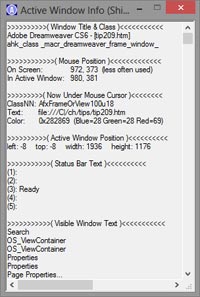 Although almost anything can be done using keyboard shortcuts, there are still times you may want to click somewhere on the screen. Using the click command, you can click any location of the screen as shown in the following example. To determine the location of where you want to click, use the Window Spy utility that can be opened by right-clicking the AutoHotkey icon (

With this command, once Windows key+F2 is pressed, the mouse clicks once at 980,381.

If you run a program often, it can be open in a script by typing run and the name of the file you want to run. Earlier in this page we gave an example of how to run Notepad by typing "run notepad" in the script. If you're familiar with the Windows Run, many of the same commands and ways you run a program or open a file work in AutoHotkey. Below are some additional examples of what the run command can do in AutoHotkey.

In the first example, this would open WordPad with the default directory C:\My Document, and open the window maximized.

Any Internet URL can be added after the run command to open that web page in your default browser.

Here is another example of the run command, which is sending an e-mail using your default e-mail client and sending the e-mail to [email protected] The subject of the e-mail is "My Subject," and the body of the message is "Body text example."

In our first example, we are using an integer variable to add two numbers together and display the results in a message box. 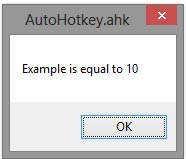 In the above example, "example" is our variable name, := is assigning the integer expression as the value of 5+5 (10). Once the variable is assigned, we are using the msgbox command to open a message box and print its value. Whenever you are sending, printing, or assigning a variable it must begin and end with a percent symbol. After saving and reloading the above script, when pressing Windows key+F2 you should see a message box similar to the example shown on this page.

In the next example, we are assigning the variable a string value, and once again displaying the results in a message box.

In the above example, we are assigning the example variable to "Nathan" and because it's a string it must be surrounded in quotes. When Windows key+F2 is pressed this time, the script opens a message box saying "Hello World! My name is Nathan".

To have a variable with a string and integer, place the expression outside the quotes, as seen in the following example.

When executed, the message box displays "Mixed variable is Example: 10"

In the example above, the variable is assigned to 5 and the conditional statement verifies it's equal to 5. Because this is true, the msgbox prints true. If the example value was not equal to 5, the msgbox would have returned false.

You would think after seeing the first conditional statement example that you could put quotes around a string in the variable and conditional statement; however, this does not work. If you want to match a string, surround your expression with parentheses, as shown in the following example.

If there is a script that you want repeat, place the script into a loop, as seen in the following example script.

Once the above script is added, and the script re-loaded or run, you should be able to click in the text box and press Windows key+F2 to print Hello World! five times. The loop can be extended to repeat as many times as you want.

Like other scripting languages, AutoHotkey also supports the use of regular expressions (regex), which lets you replace any text within a string with other text. A regex is useful when you may want to change the formatting of text or remove unnecessary data within a string.

In the example above, the third line with RegExReplace replaces the @ and everything after it with nothing. As a result, the example variable only shows the username account of the e-mail address. When Windows key+F2 is pressed, the message box displays "Username is support".