Quickly scroll to an item in a list or drop-down 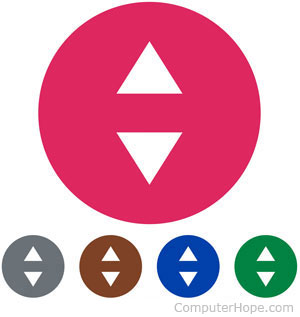 Quickly find text, icon, or other items in a group or list by highlighting one of the icons or list items and pressing the beginning letter. Below are examples of how to use this tip.

Instead of scrolling through a list of options on an Internet drop-down list, click the list and then press the first letter you want. For example, to get to United States in the following example click the down arrow and then press "u" to get the first "u" item, which in Uganda. If you continued to type United, it would continue to scroll down as long as something is matched.

You can also use the up or down arrow keys to move to the item you want. For example, you could press "u" and then press the down arrow until you get to United States.

If you have lots of icons on your desktop or in another folder highlight one of the icons and press the first letter. For example, if you were looking for an icon named test highlight any desktop icon and press T to jump to the first icon starting with "t."

Press T multiple times to highlight each option in the list that starts with T.